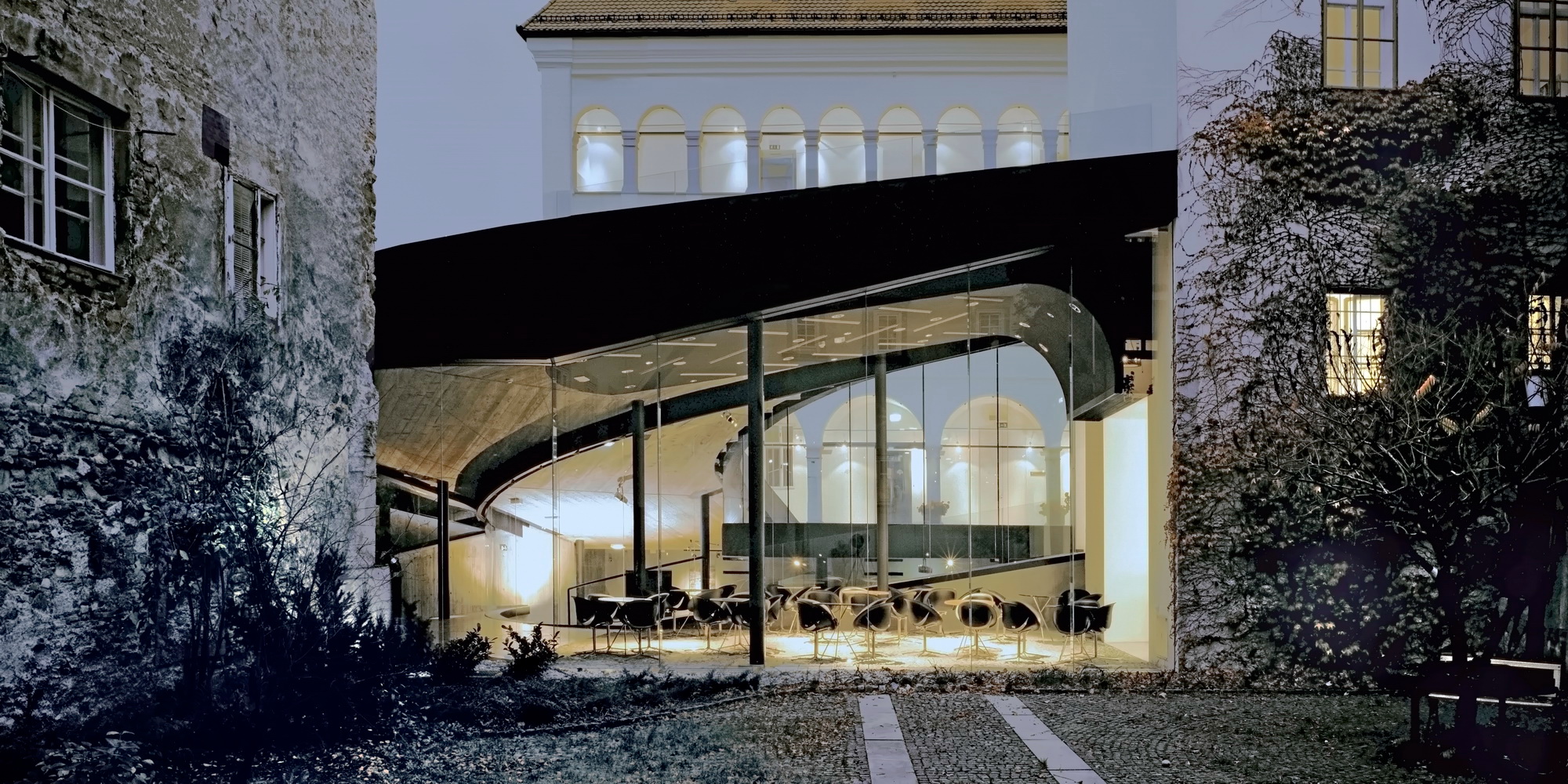 concept This project involves the renovation and extension of the Auersperg Palace, located in the heart of the protected historical city centre of Ljubljana. The competition entry suggested a spiral itinerary for the visitor to walk through exhibition spaces with added element between the wings of the palace, as the spaces were previously labyrinthine and disconnected. Palace History The palace and its site have a very rich history from the prehistoric period to Roman and medieval times, with each era adding something to the building. Until the 17th century, three older (pre-16th century) structures shaped the floor plan of the palace. Between 1654 and 1658, the faÁade was adapted and arched corridors lined the courtyard to suit the new baroque fashion. After 1709, with a new north wing built between 1709 and the 1720, a new staircase and two large halls were constructed. Finally, in 1820, new ceilings, the arches were closed and small windows were added on the facade. The palace officially became the City Museum of Ljubljana in 1935, and shared the building with other institutions like a library and archive in the next decades after the war. The weight of these programs had been too much for the deteriorating structure, and by 2000, renovating the palace became a priority due to the decay of the building. Renovation In preparation for the renovation, a large-scale archaeological research was conducted, with suspicion that there were rich archaeological remains under the courtyard and the internal atrium. Before beginning excavations, it was unknown where these findings would be or how important they would be. The design of the museum extension occurred parallel to the excavations on site, with an open-plan structural system that was adaptable to archaeologists' suggestions. Archaeologists uncovered prehistoric graves, remnants of Roman buildings, and a main road that once connected the ancient city of Emona with other Roman cities. The road, built in the beginning of the 1st C. AD was almost 8 m wide, and its maintenance in the early middle ages had a significant impact on the layout of the city in the future. Extension and Visitor Experience The first spiral Ö The visitors' walk begins at -3 m, where the ground level was situated in prehistory. Since the city's ground level rose over the years, the walkway ascends up to the era of Rome, represented by original Roman road. The path then takes the visitor to medieval and baroque Ljubljana, where the museum bar is located, before returning to the ground-floor lobby. The archeology is preserved in situ ñ no stone has been relocated. The courtyard floor bifurcates and rises parallel to this path and the location of the Roman road, forming a roof above the stepped archeology. The second spiral Ö functions as a roof over the archeology from level -3 m to level 0, rising from the courtyard and becoming a level balcony, affording different views of the courtyard and the palace. The third spiral Ö continues inside the palace on level +4 m as a balcony overlooking the main hall. Ascending up the old staircase, the spiral becomes a suspended ceiling (at 7.5 m) containing the whole service infrastructure: climate control, diffuse lighting, the sound and fire protection system. The suspended spiral continues through the rooms taking the visitor through the exhibition, a situation that gets repeated on the next floor (at 12.5 m). Elements that had been altered over time to suit the building's changing needs were to be stripped back to their original states so that visitors could enjoy the building as it was originally designed. The existing palace was renovated using necessary, minimal elements like frameless glass surfaces, invisible doors and neutral materials. The exhibition spaces are preserved at their original size, as per the conservation program. Furniture in the palace is integrated within the existing walls. The colors of the glazed surfaces arise from the ones used by archaeologists to define different historical eras. 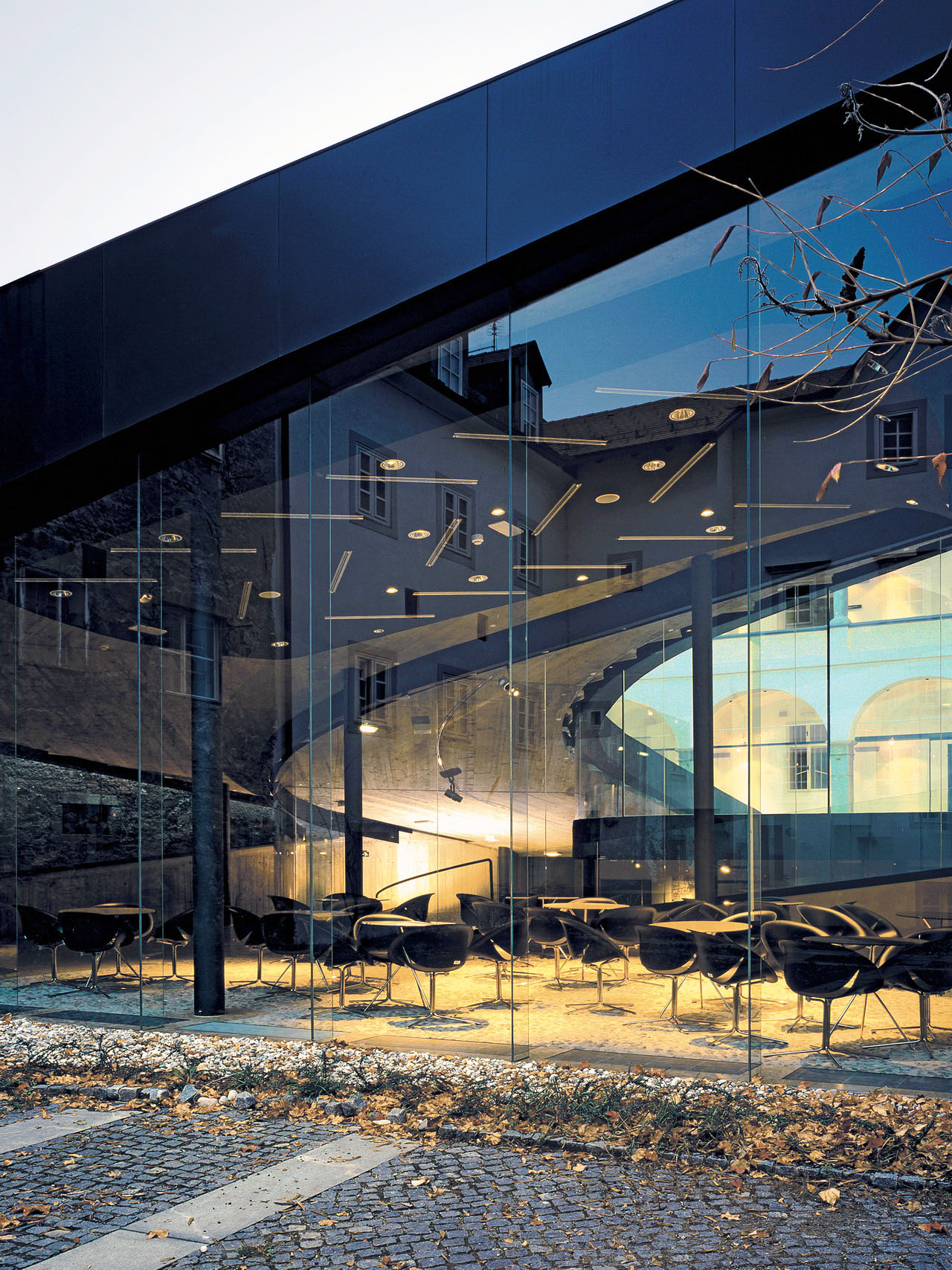 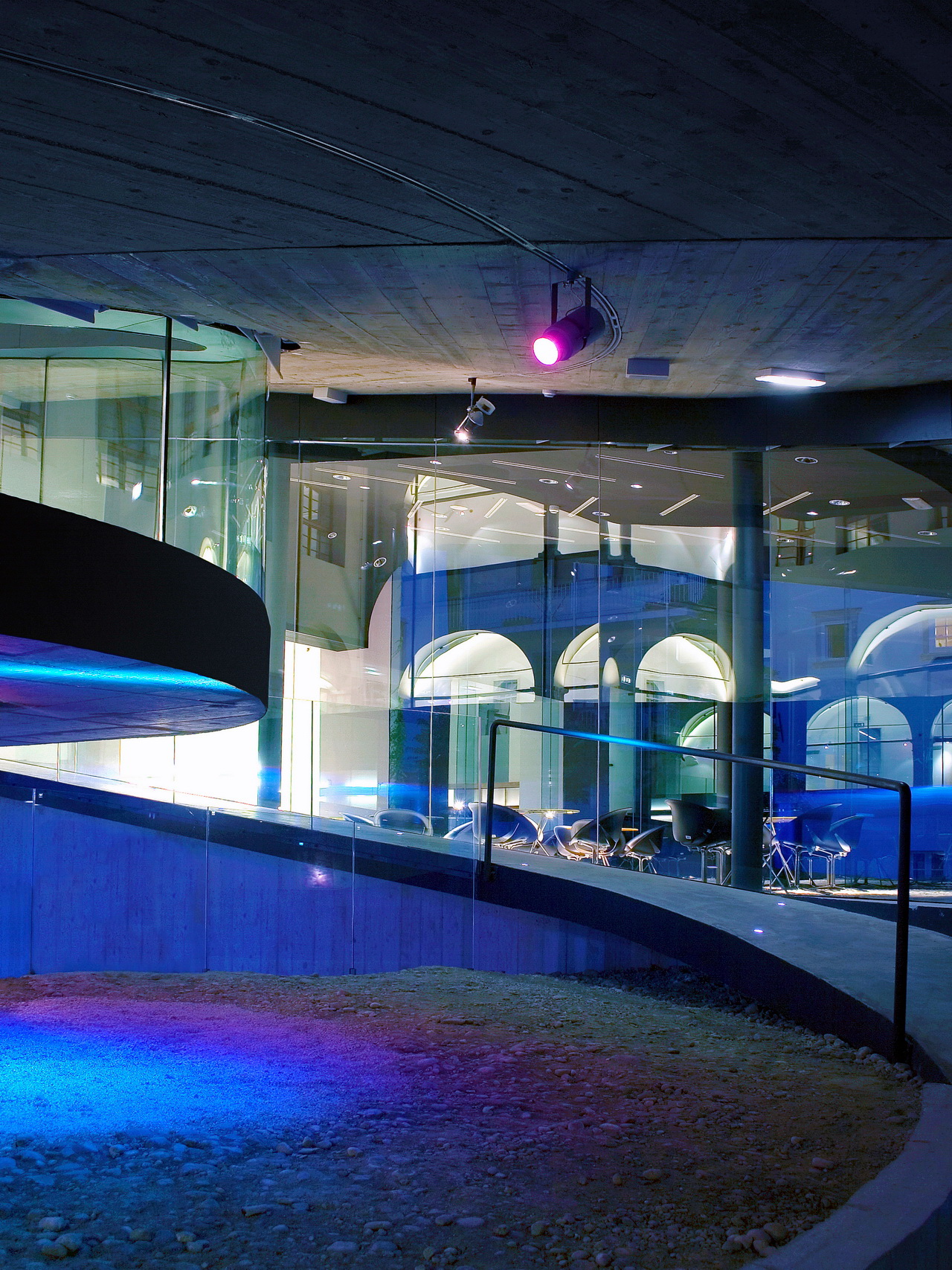 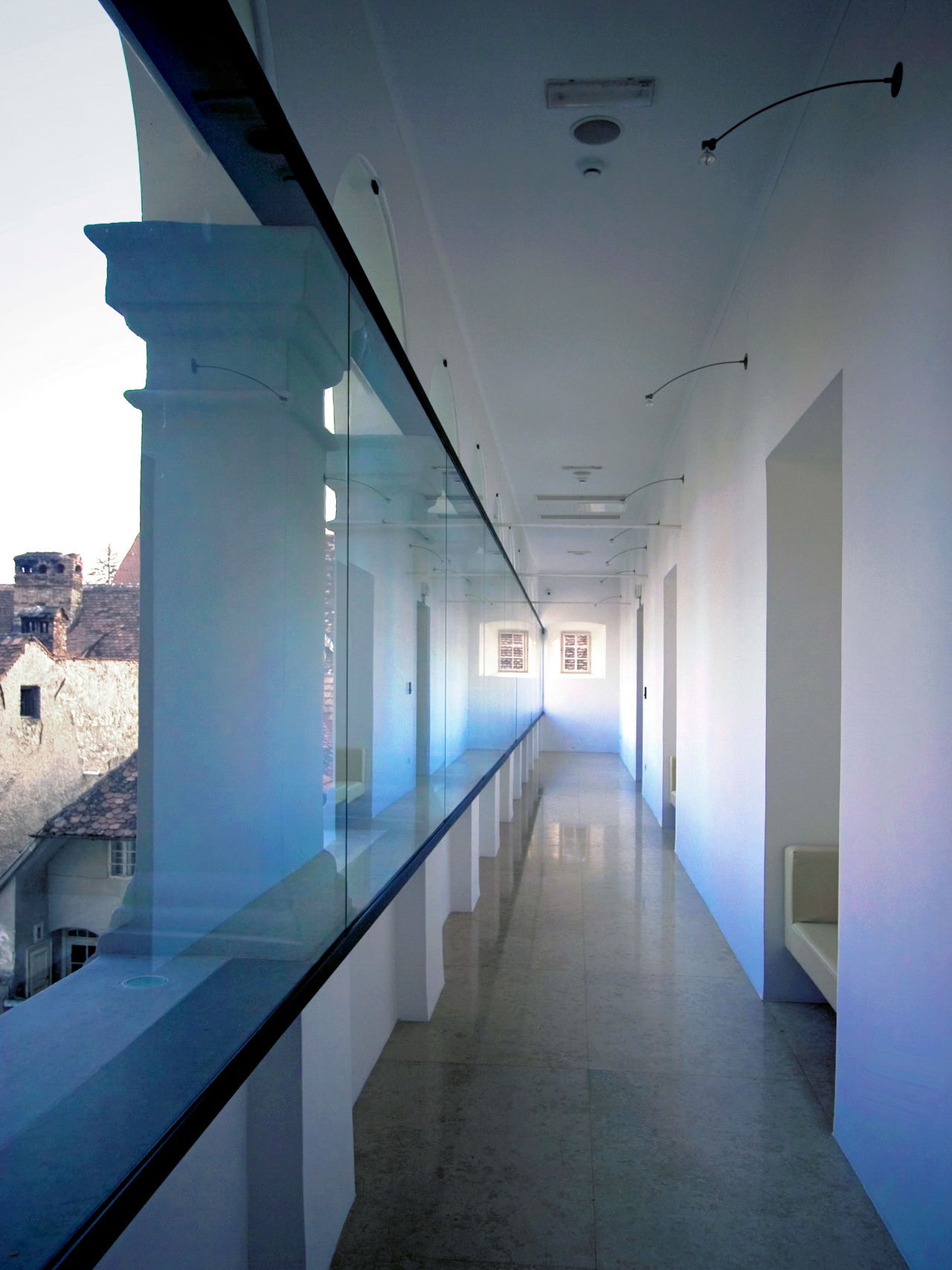 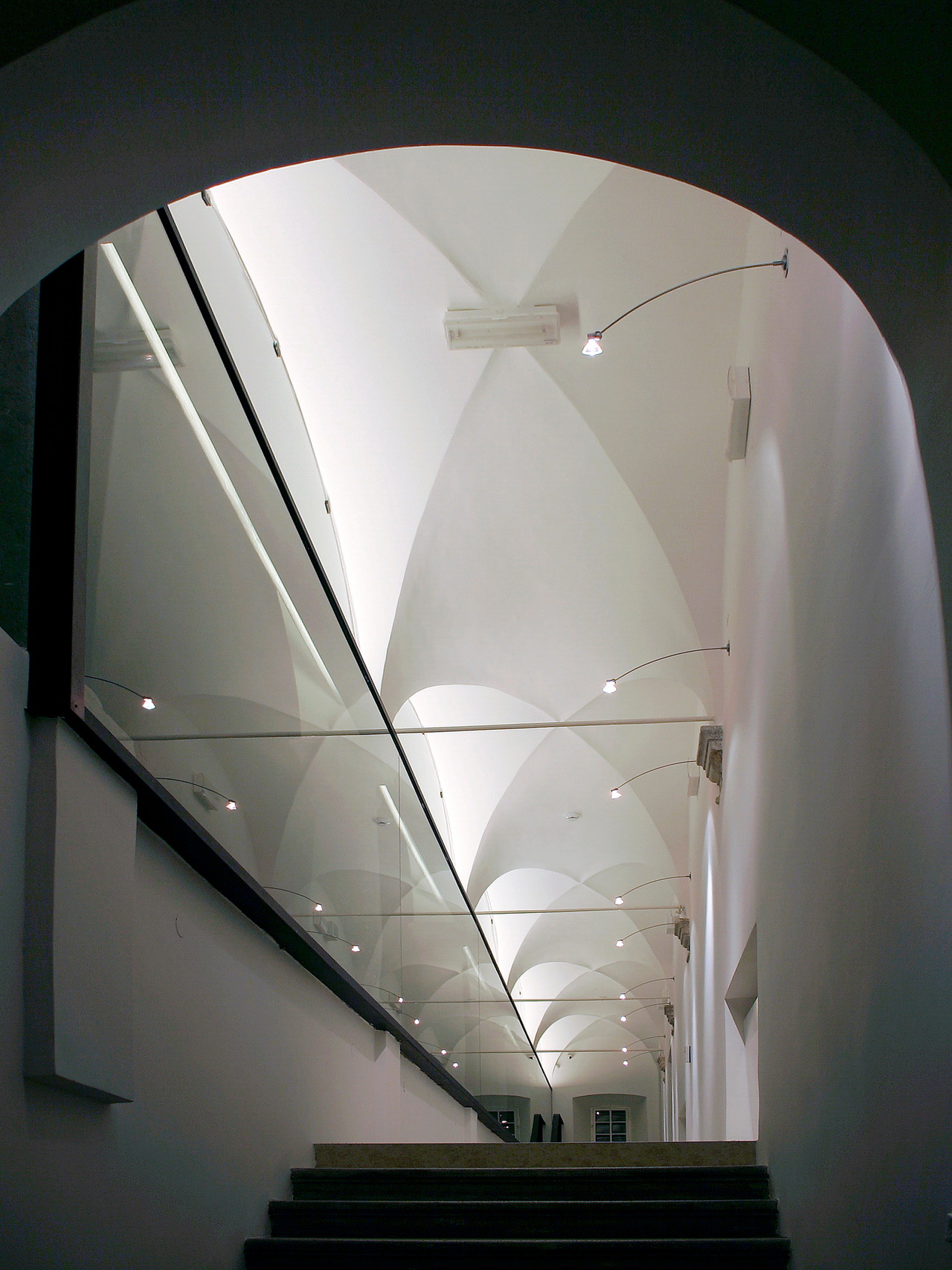 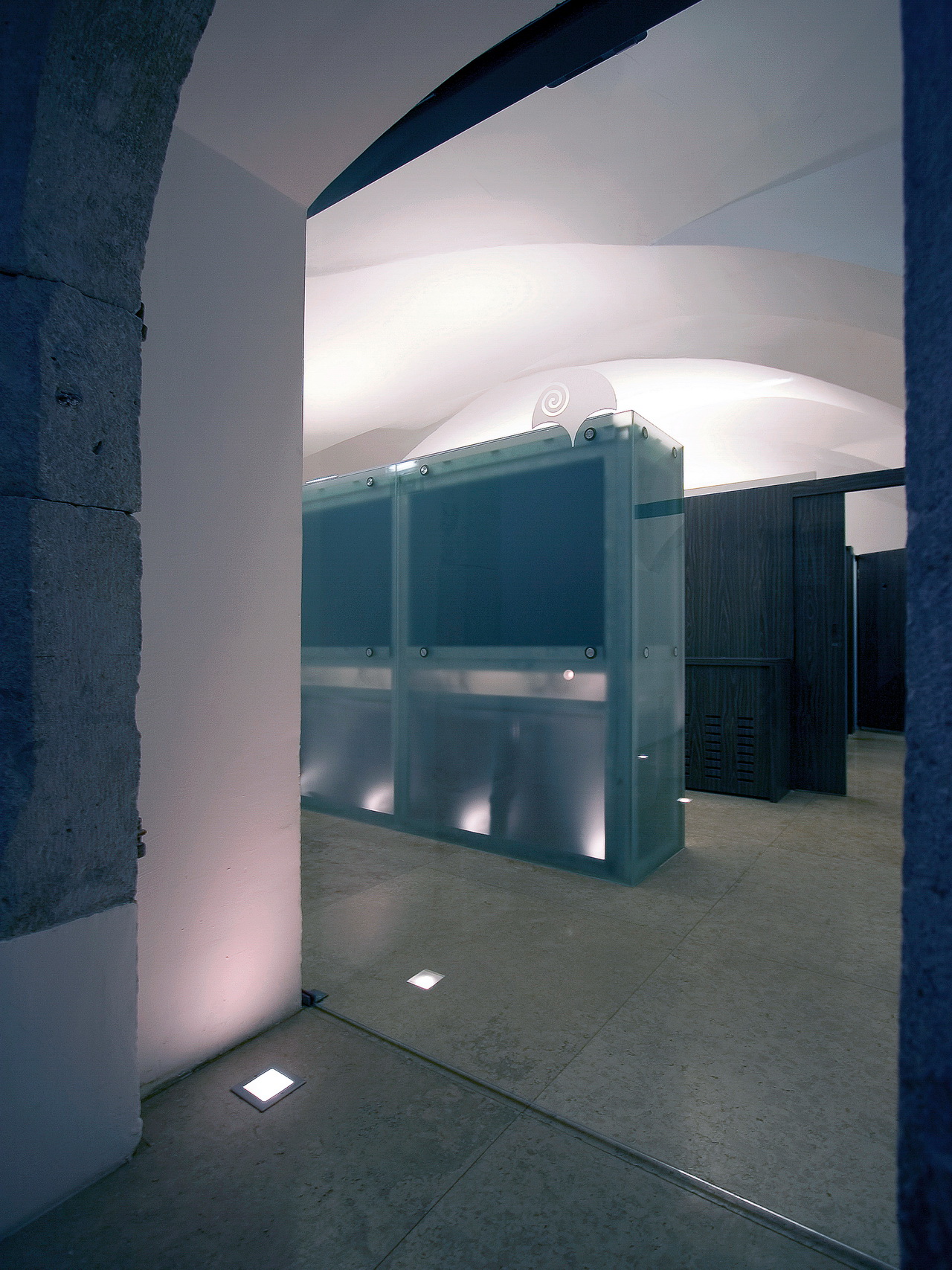 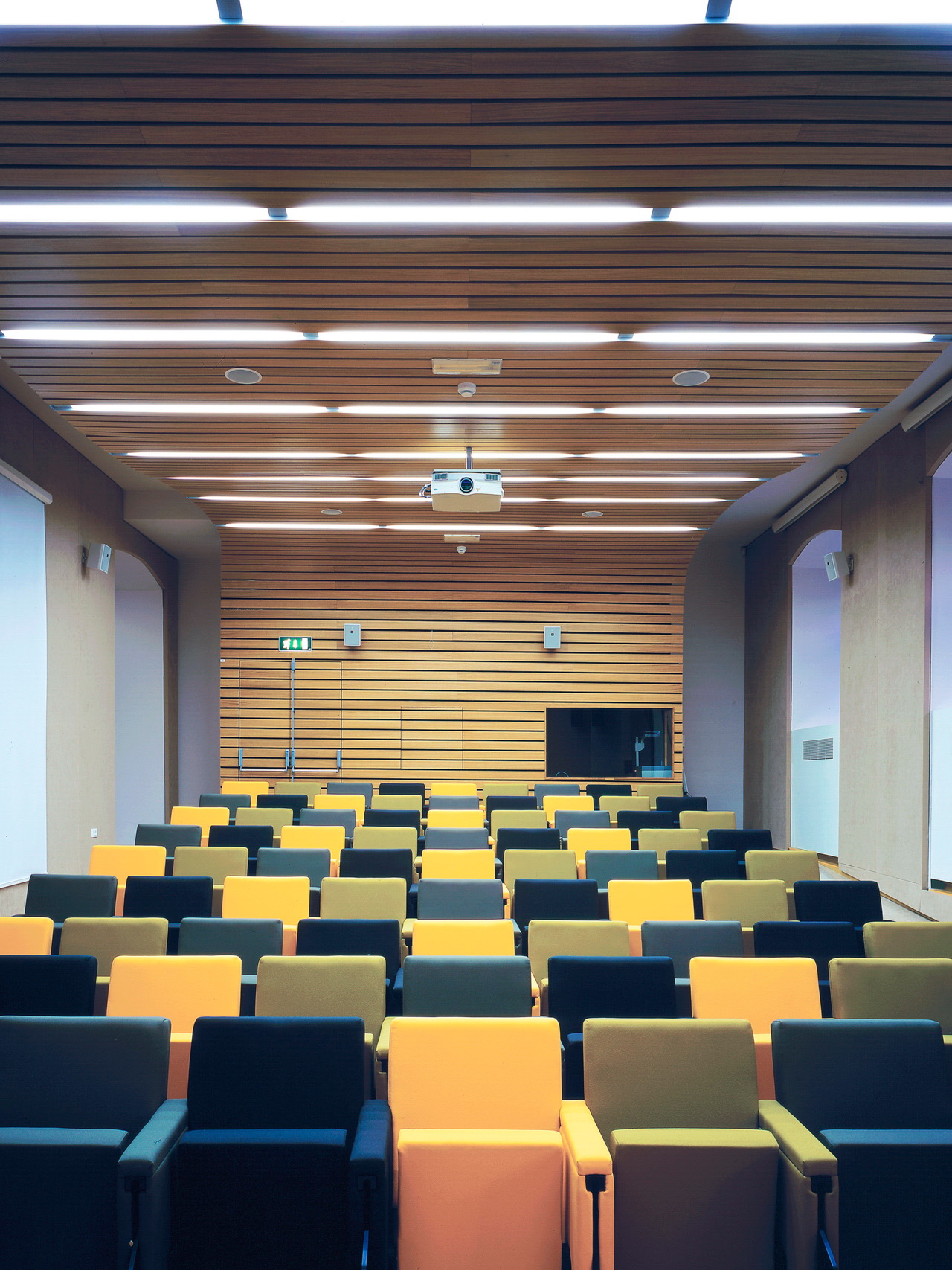 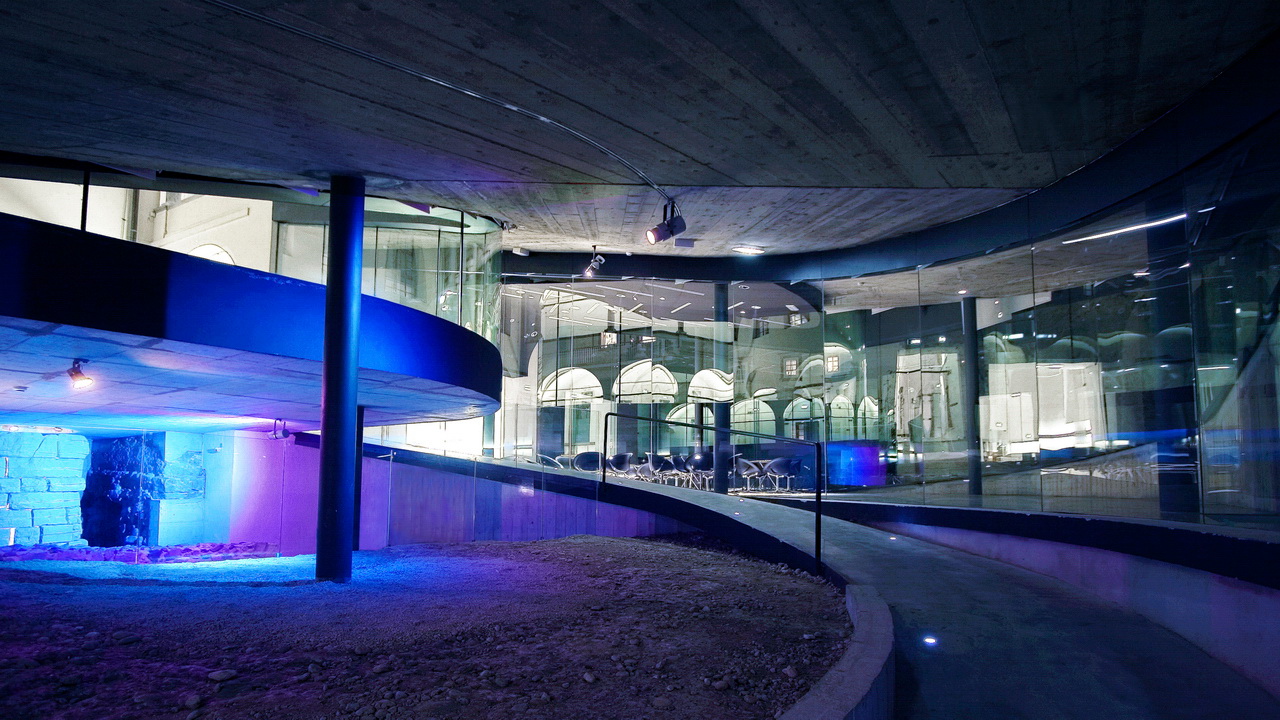 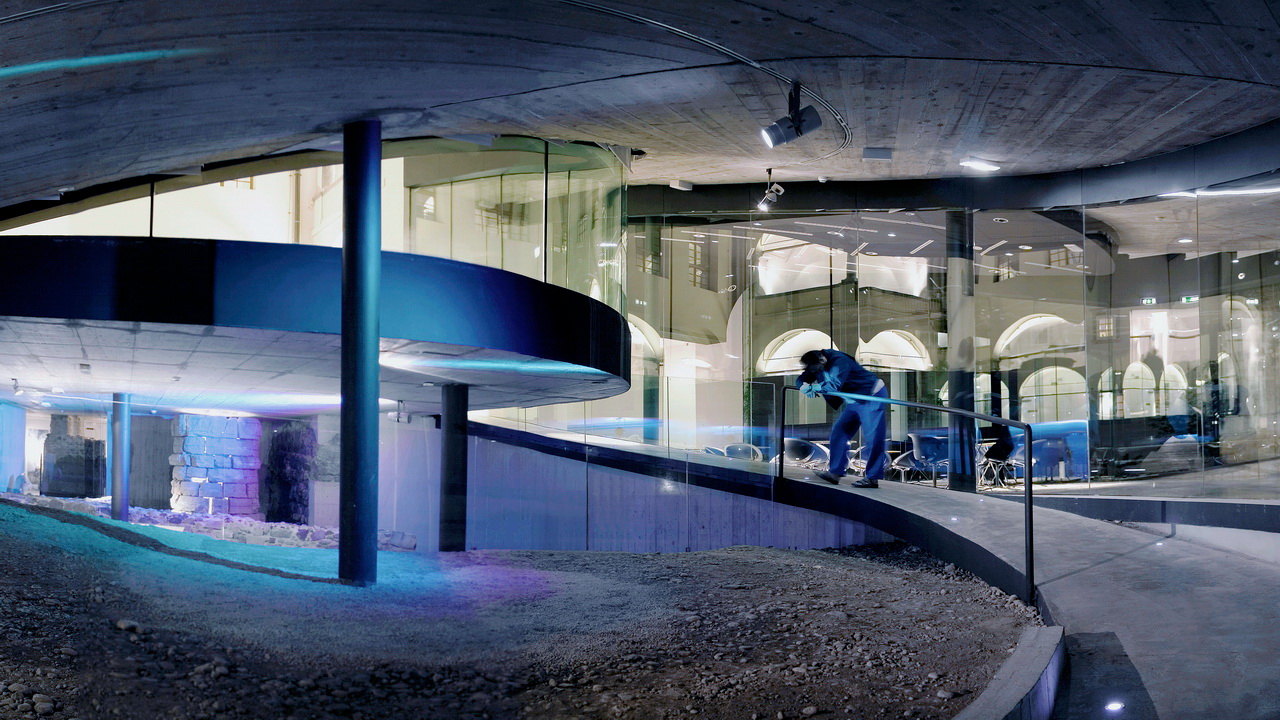 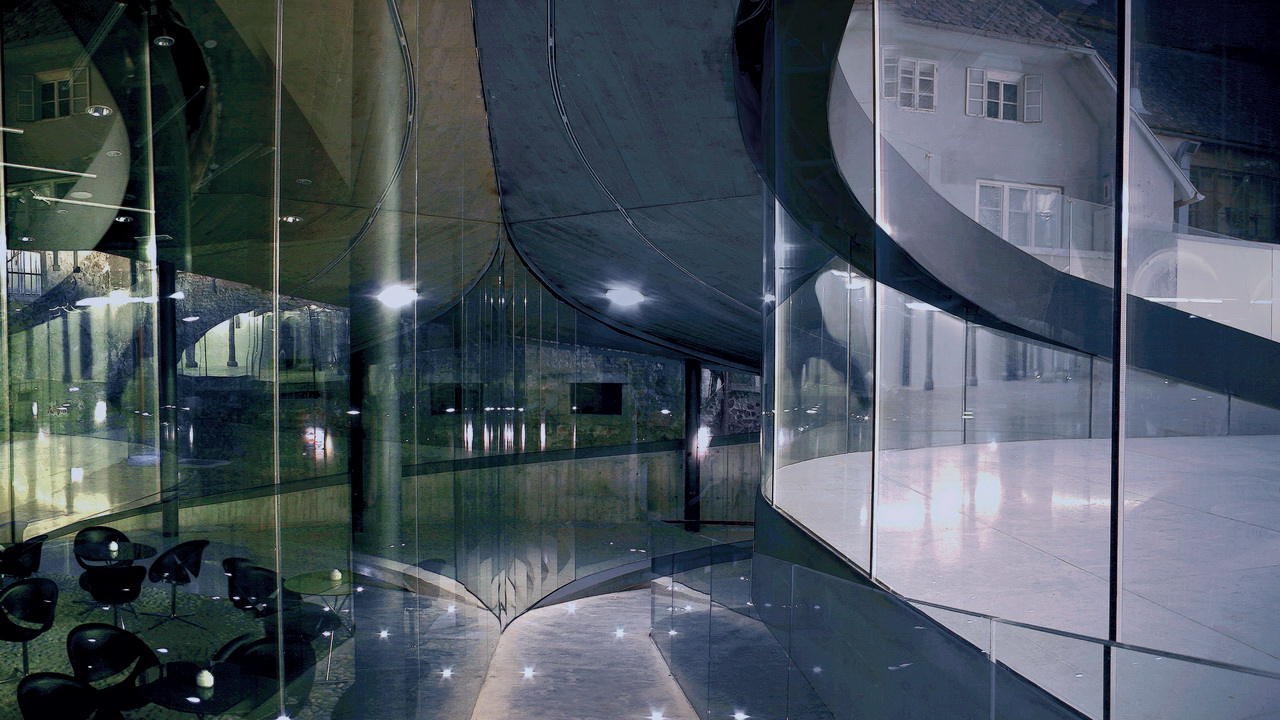 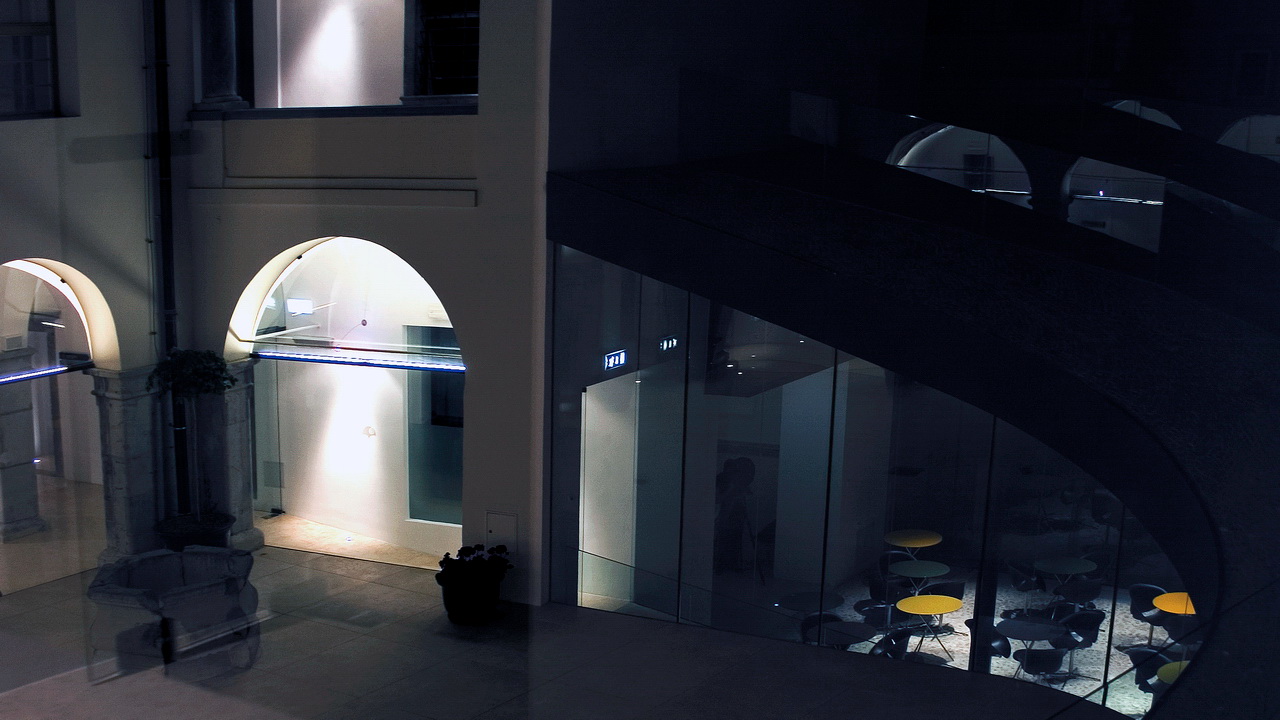 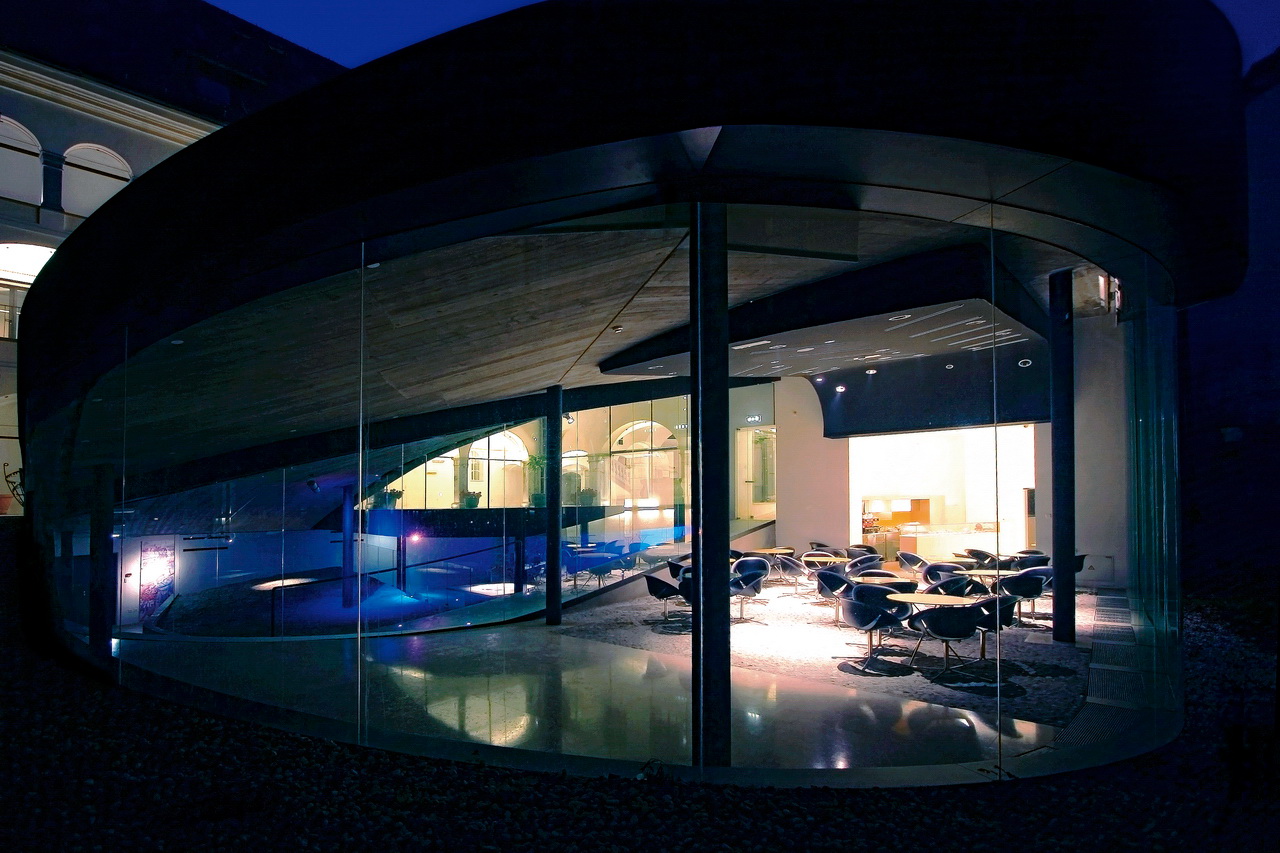 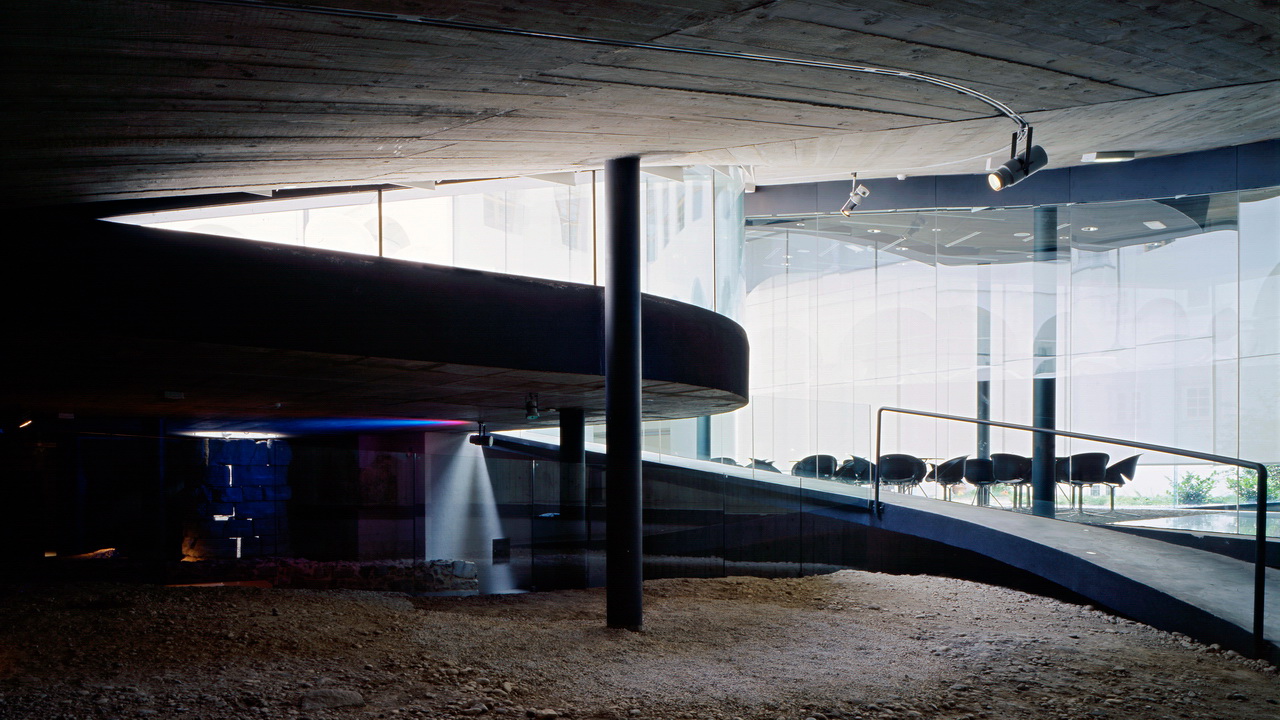 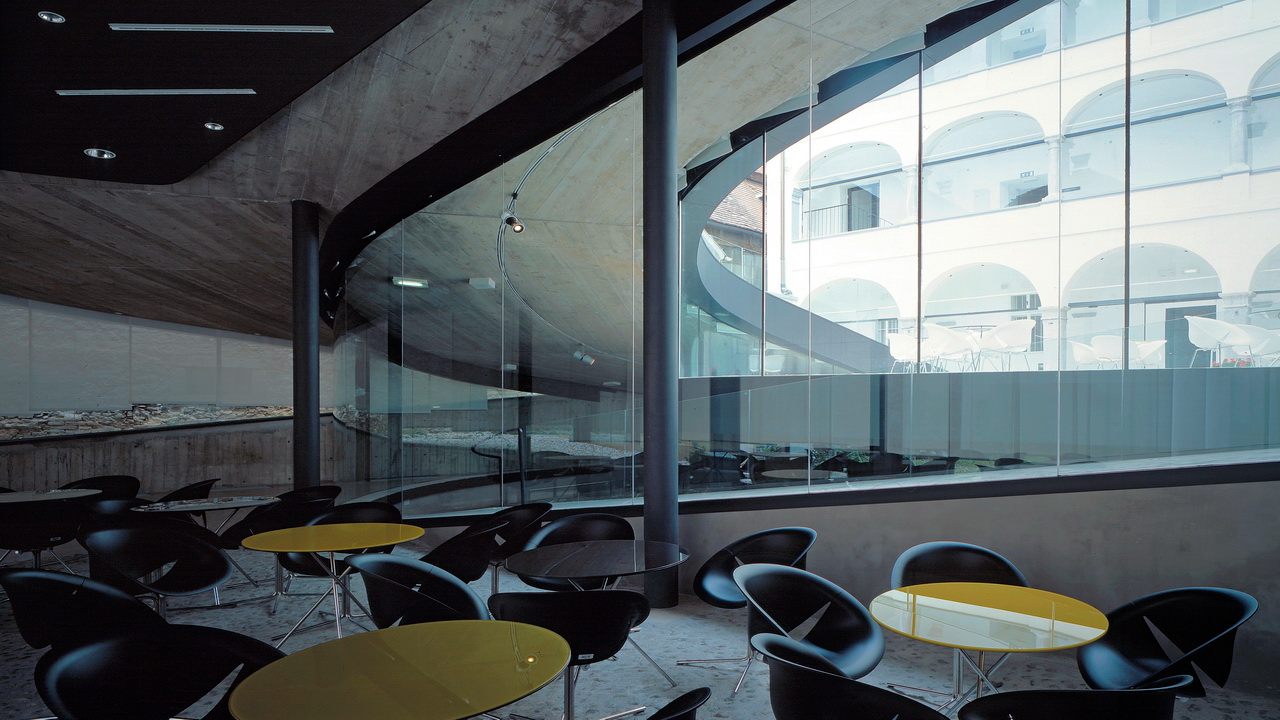 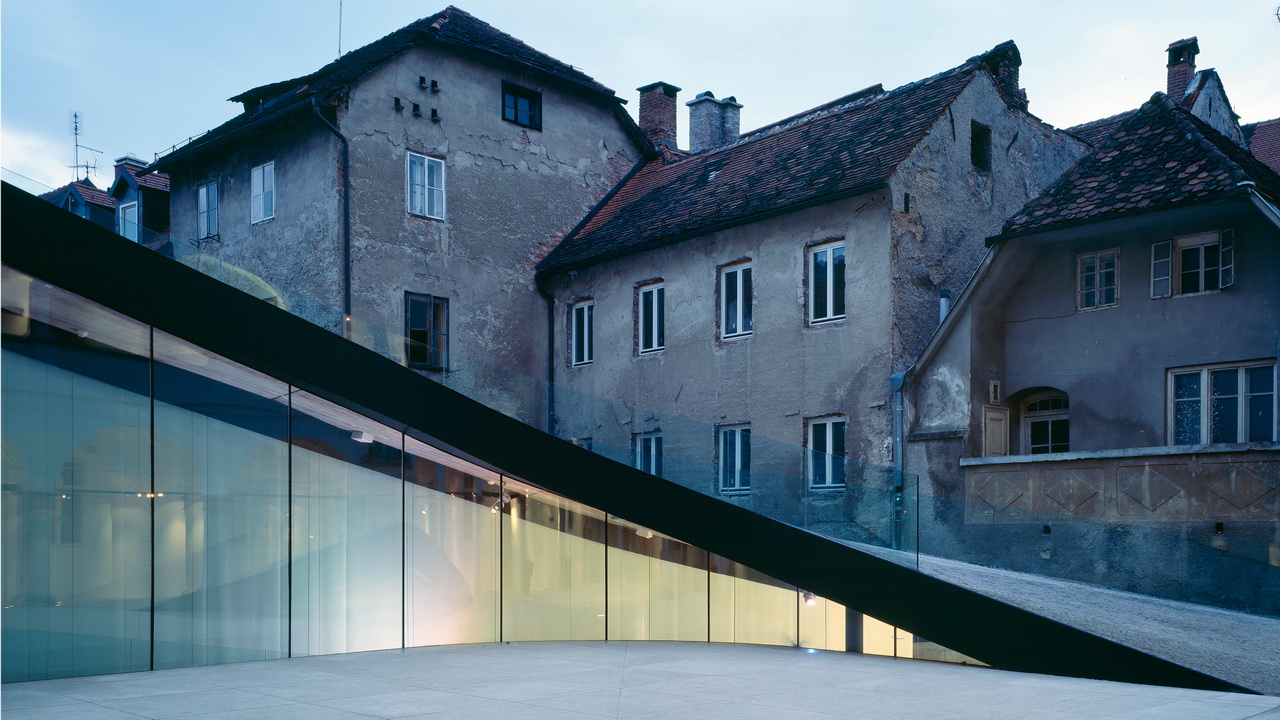 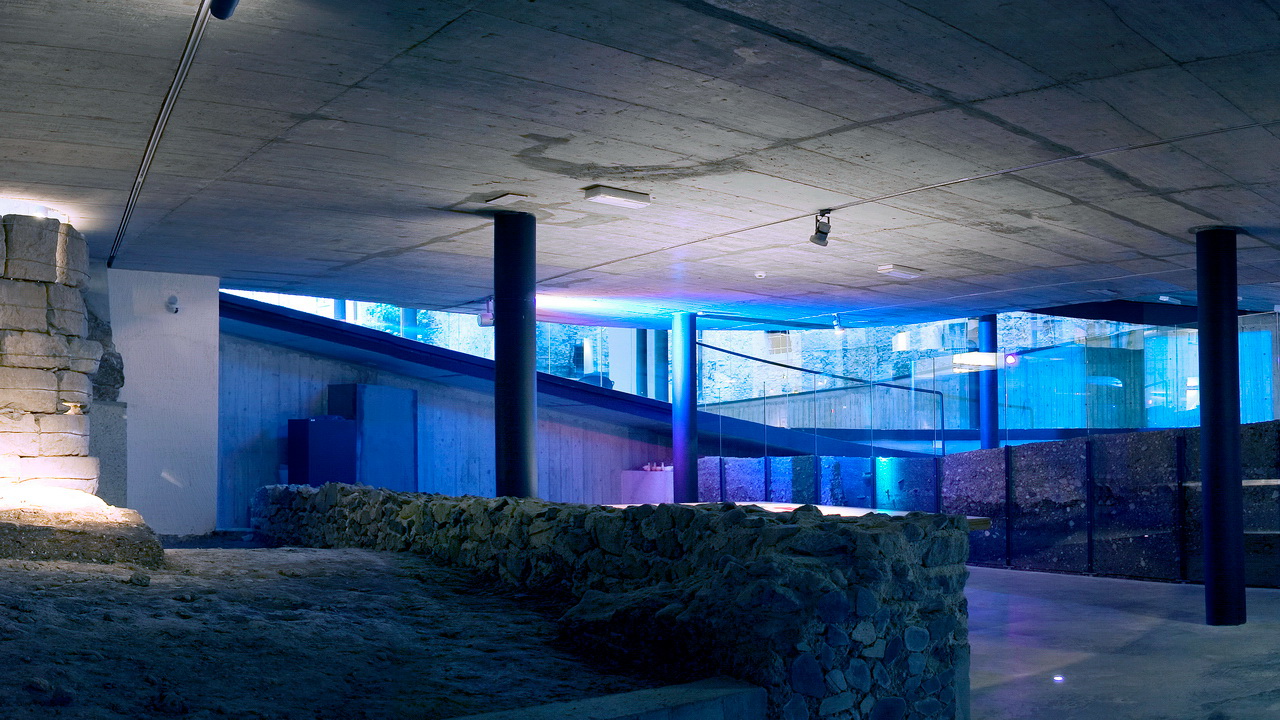 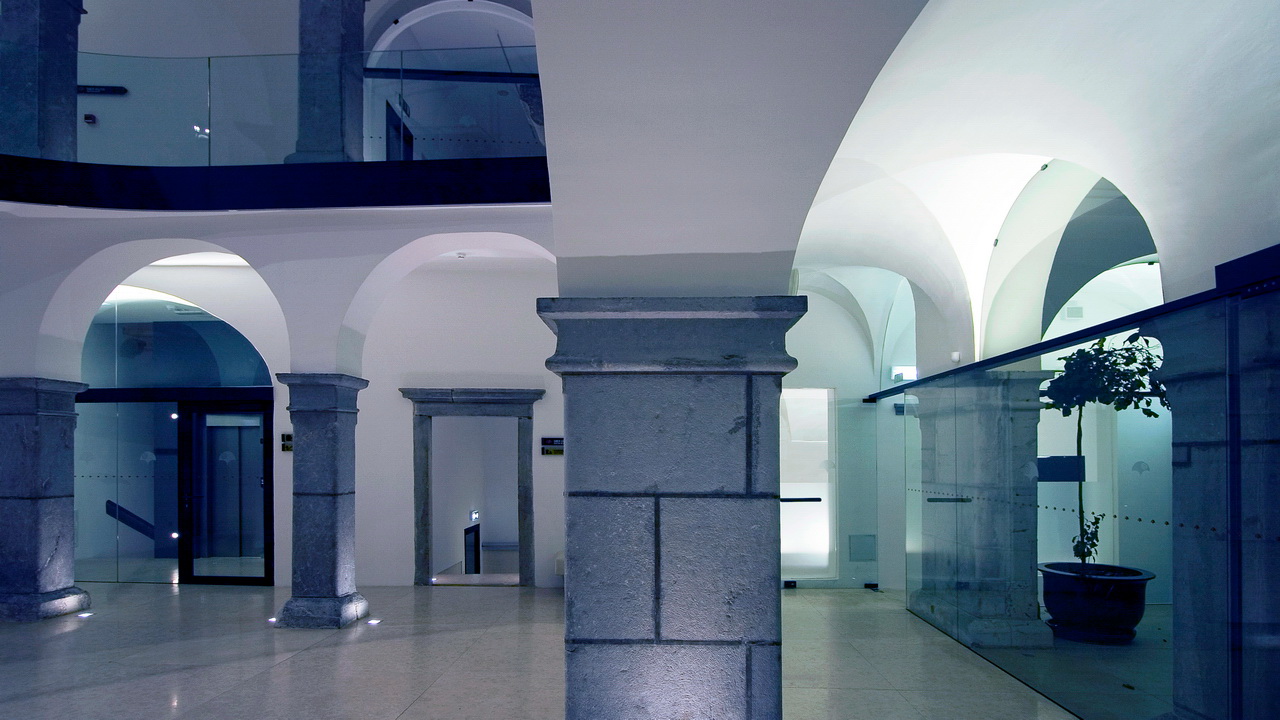 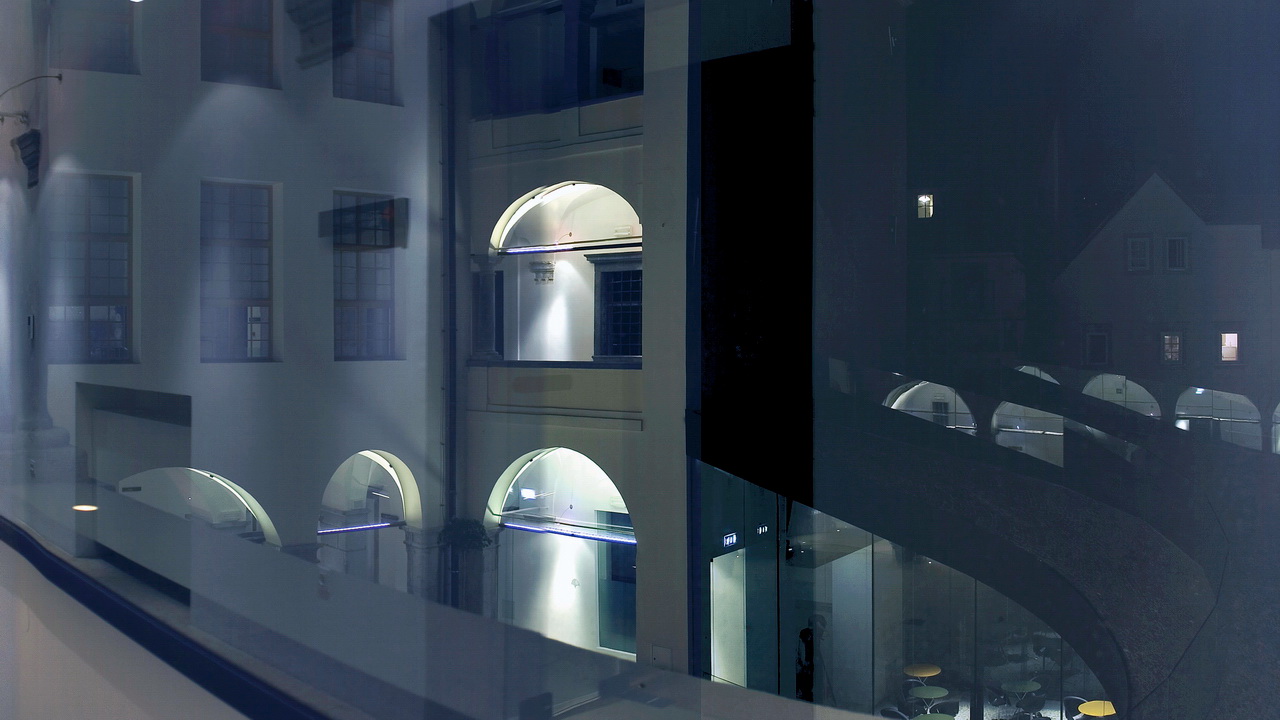 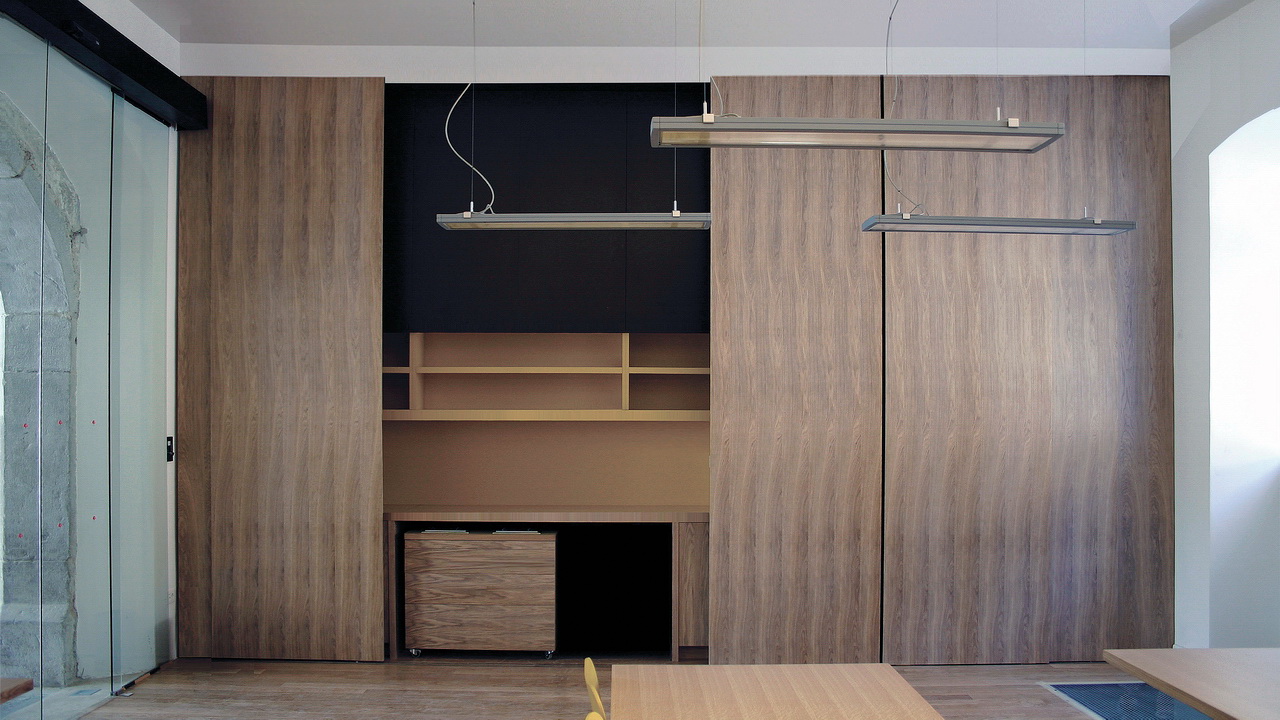 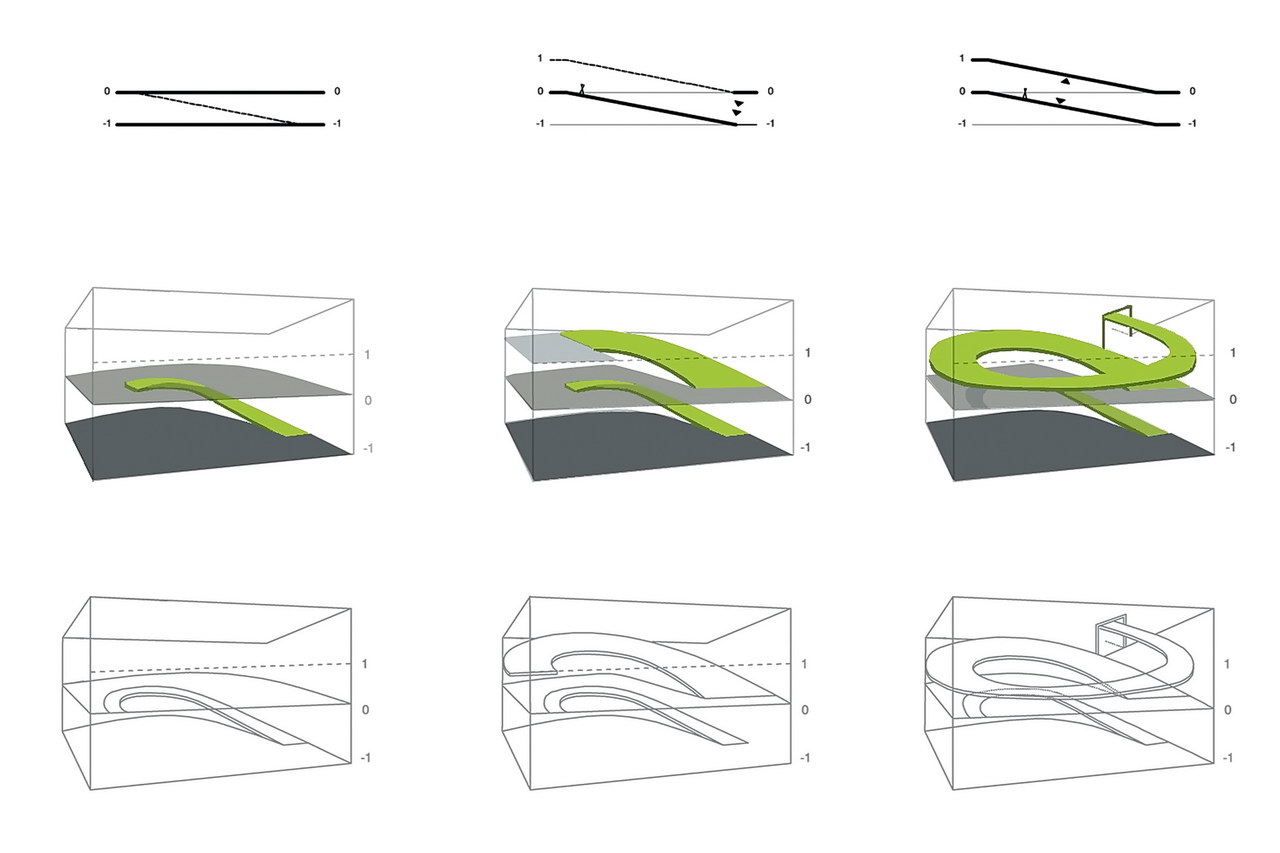 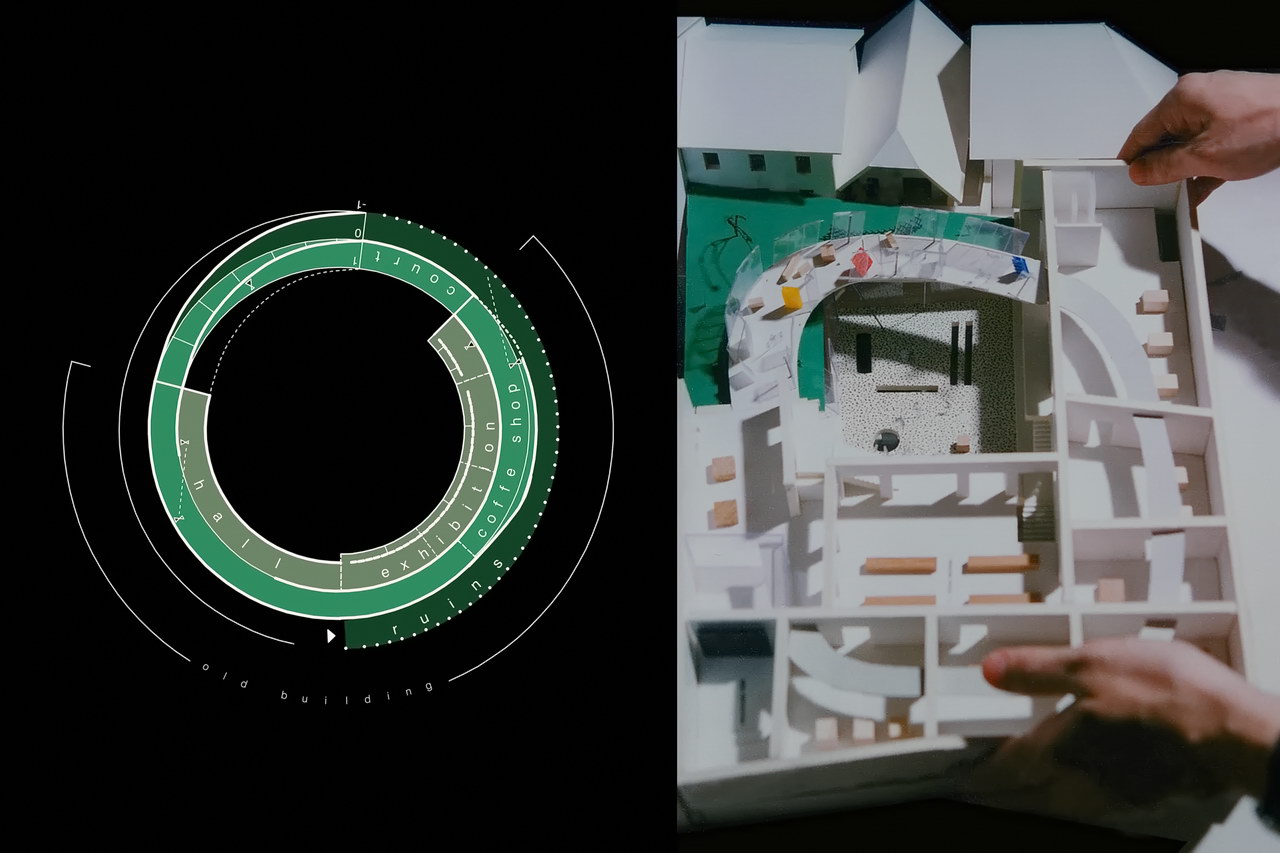 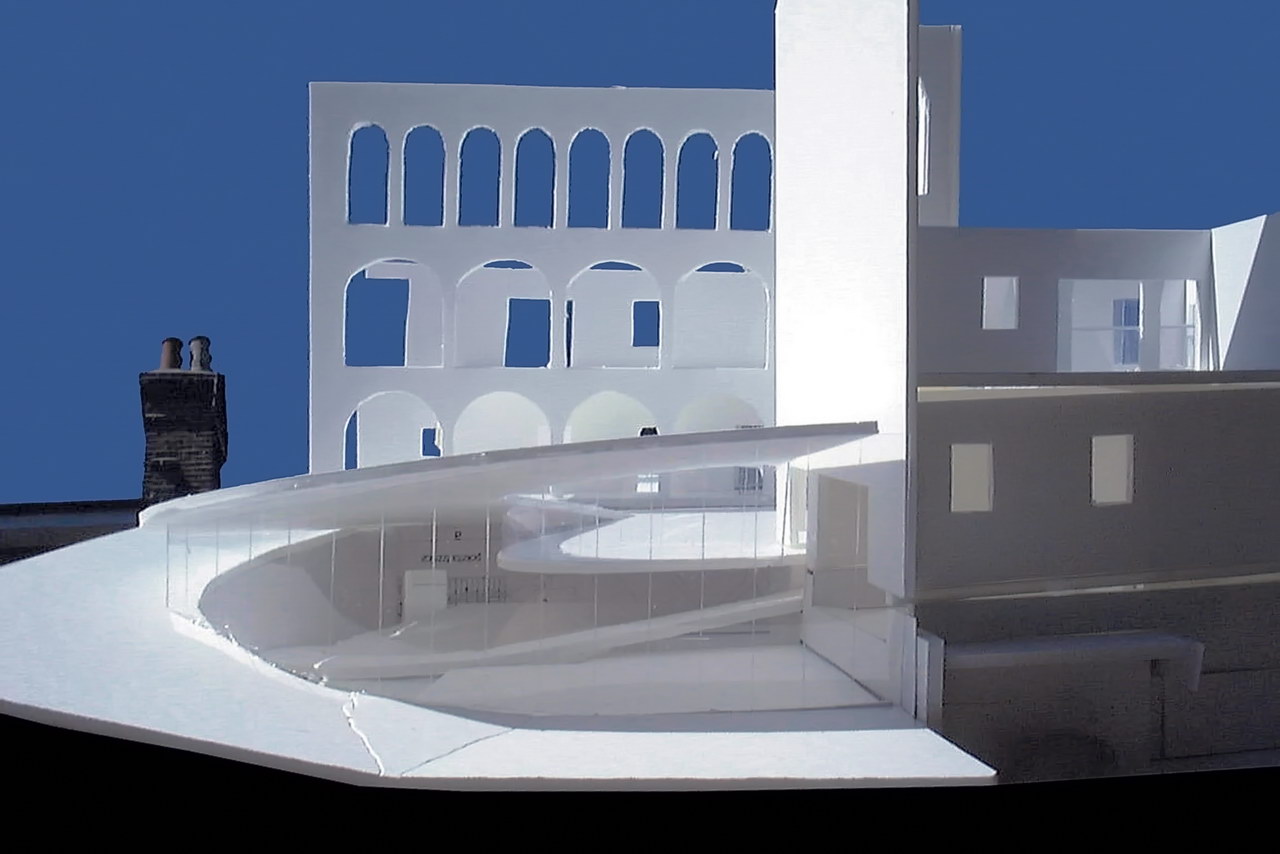 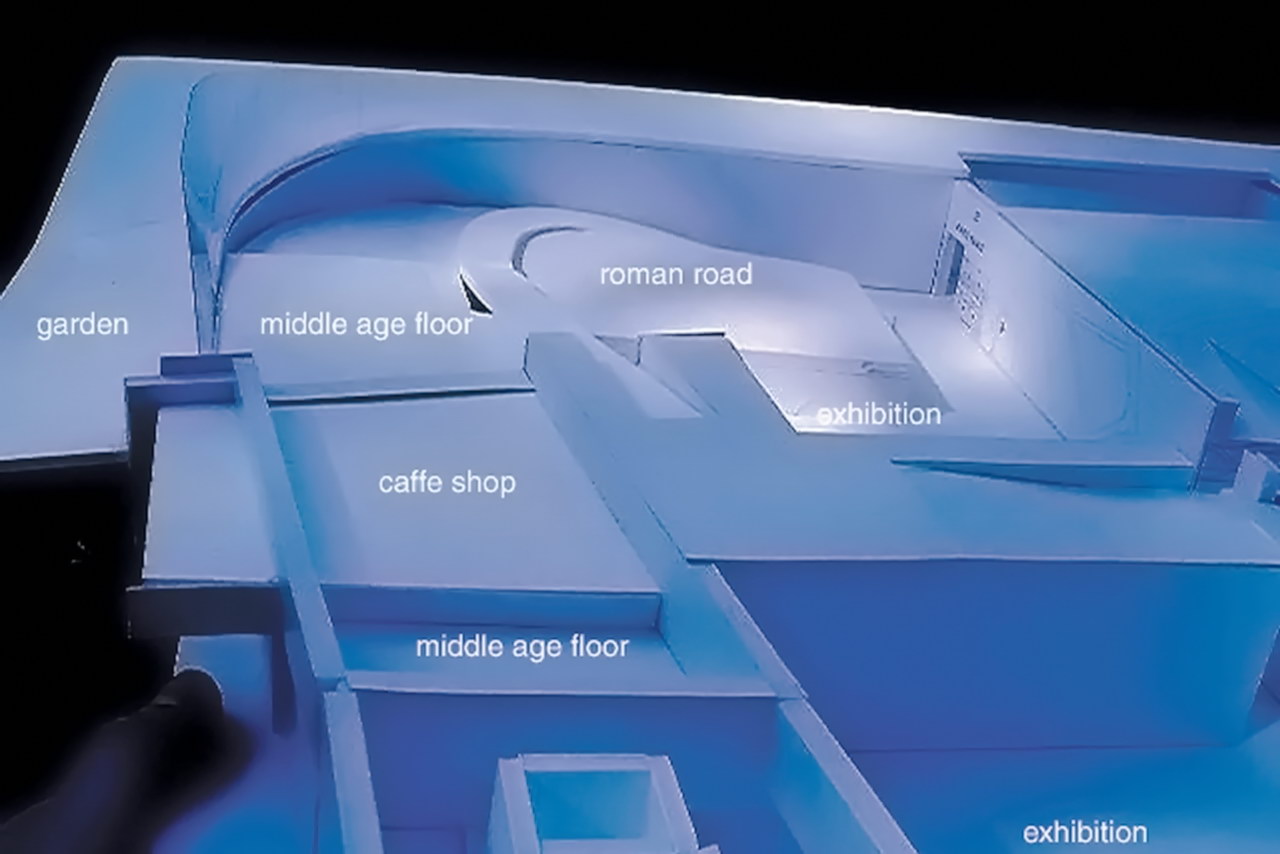 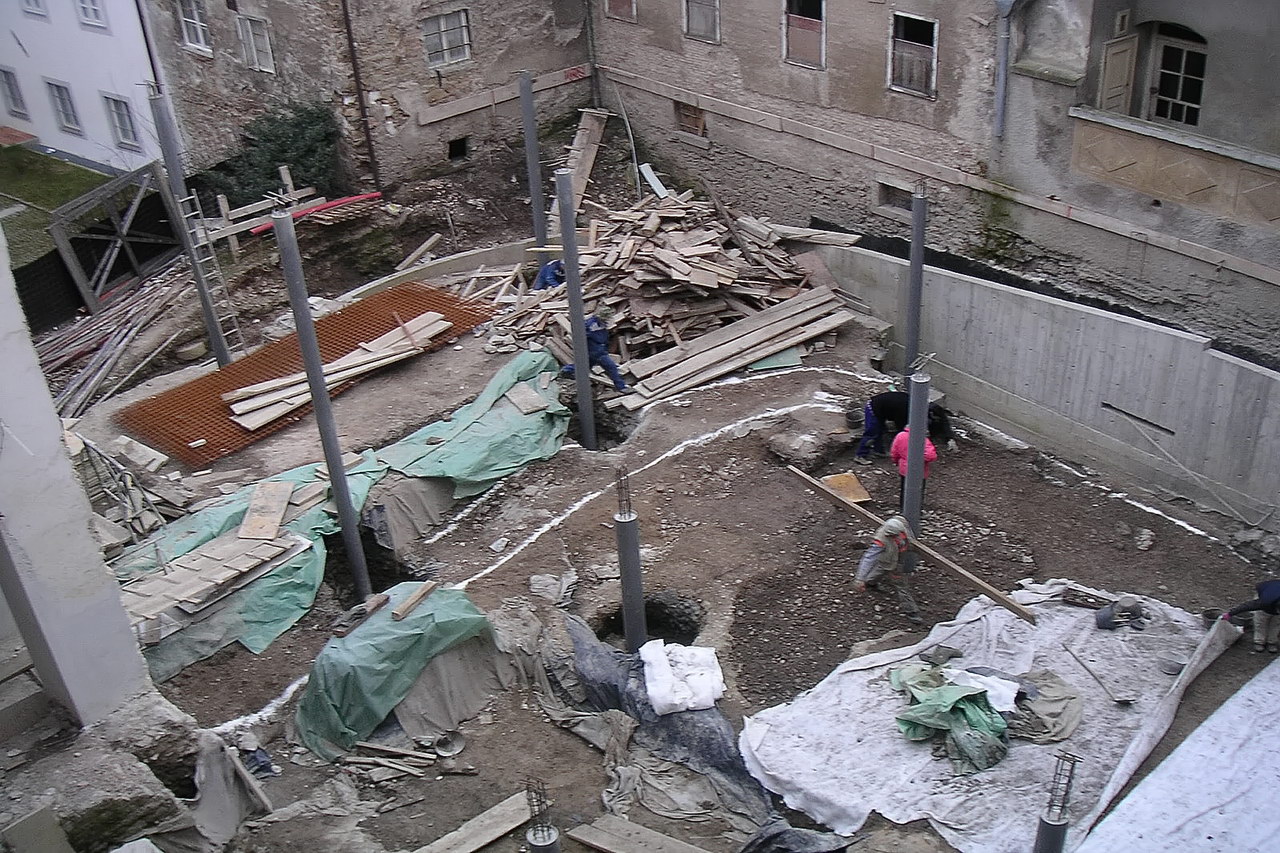 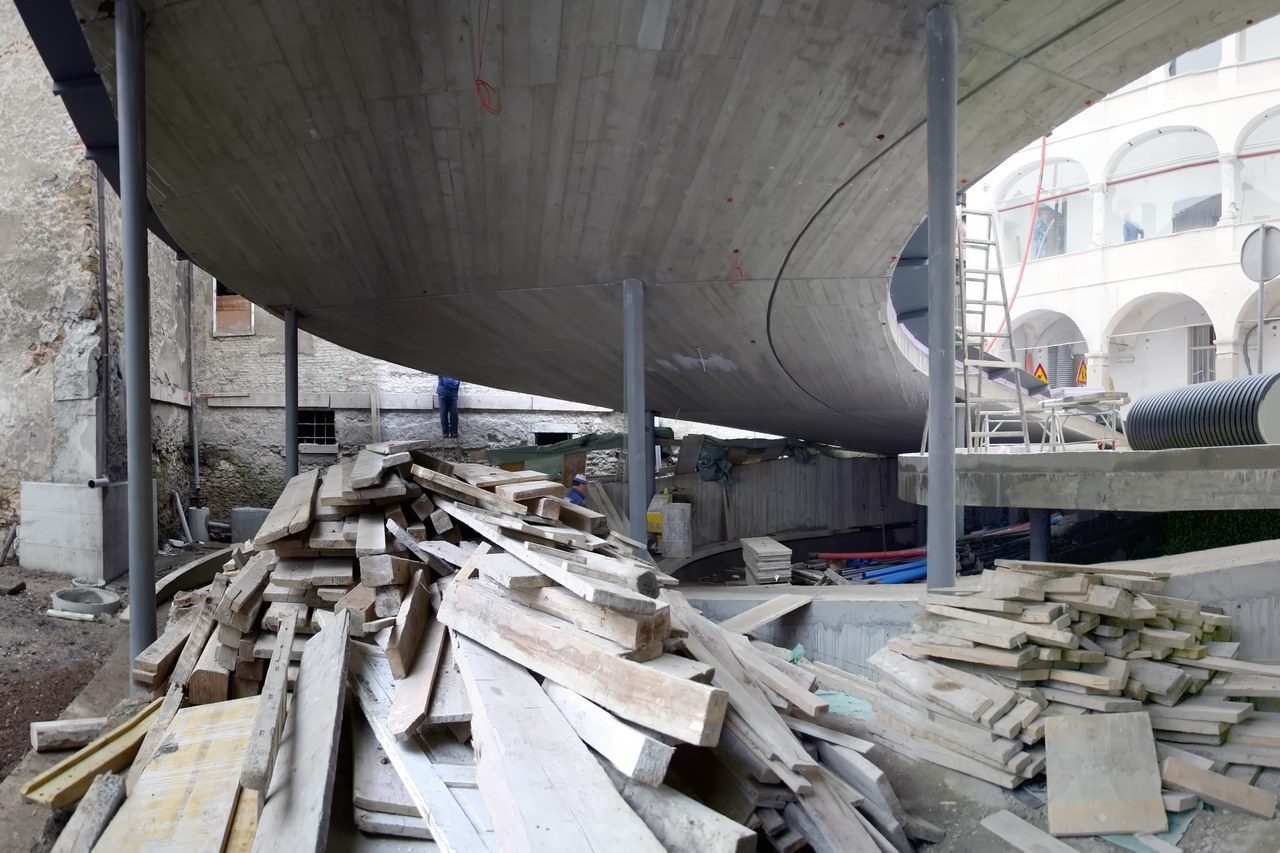 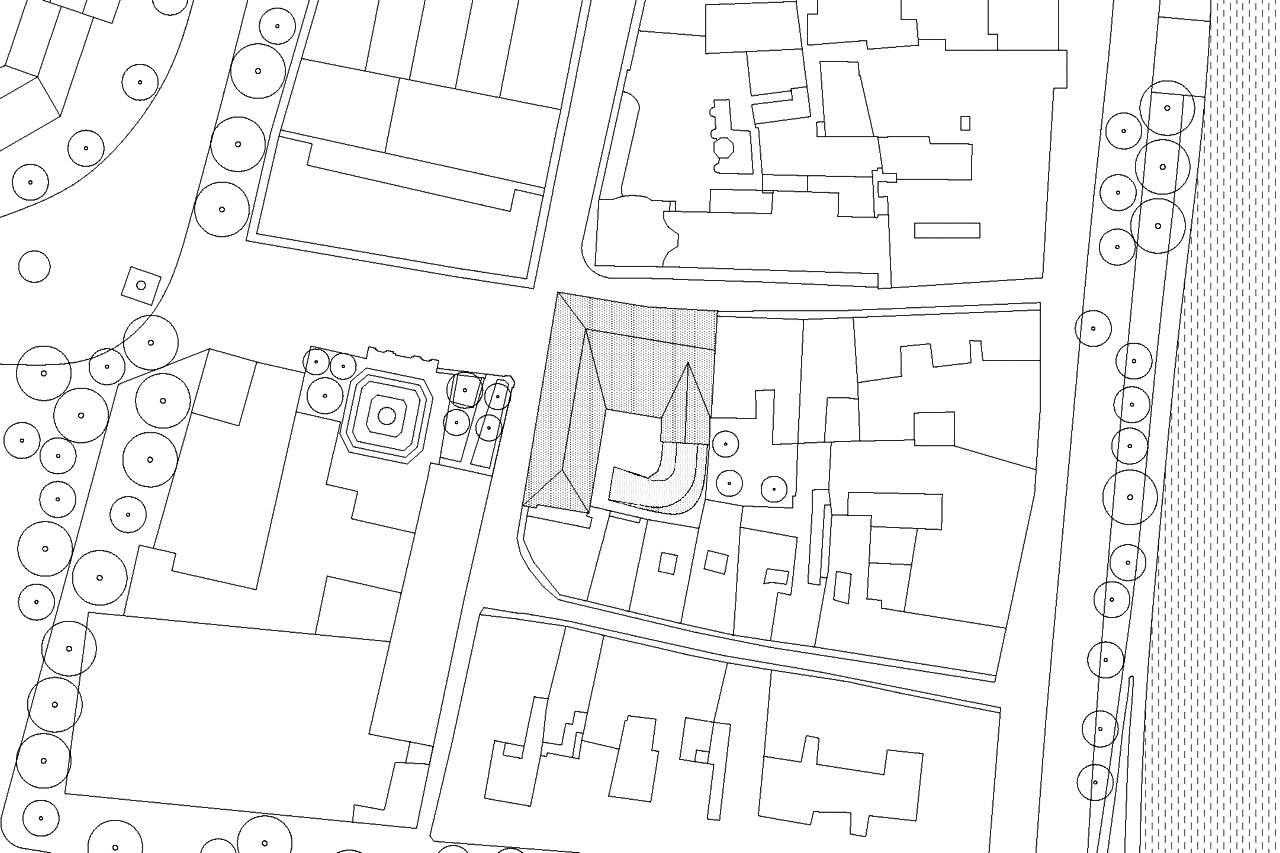 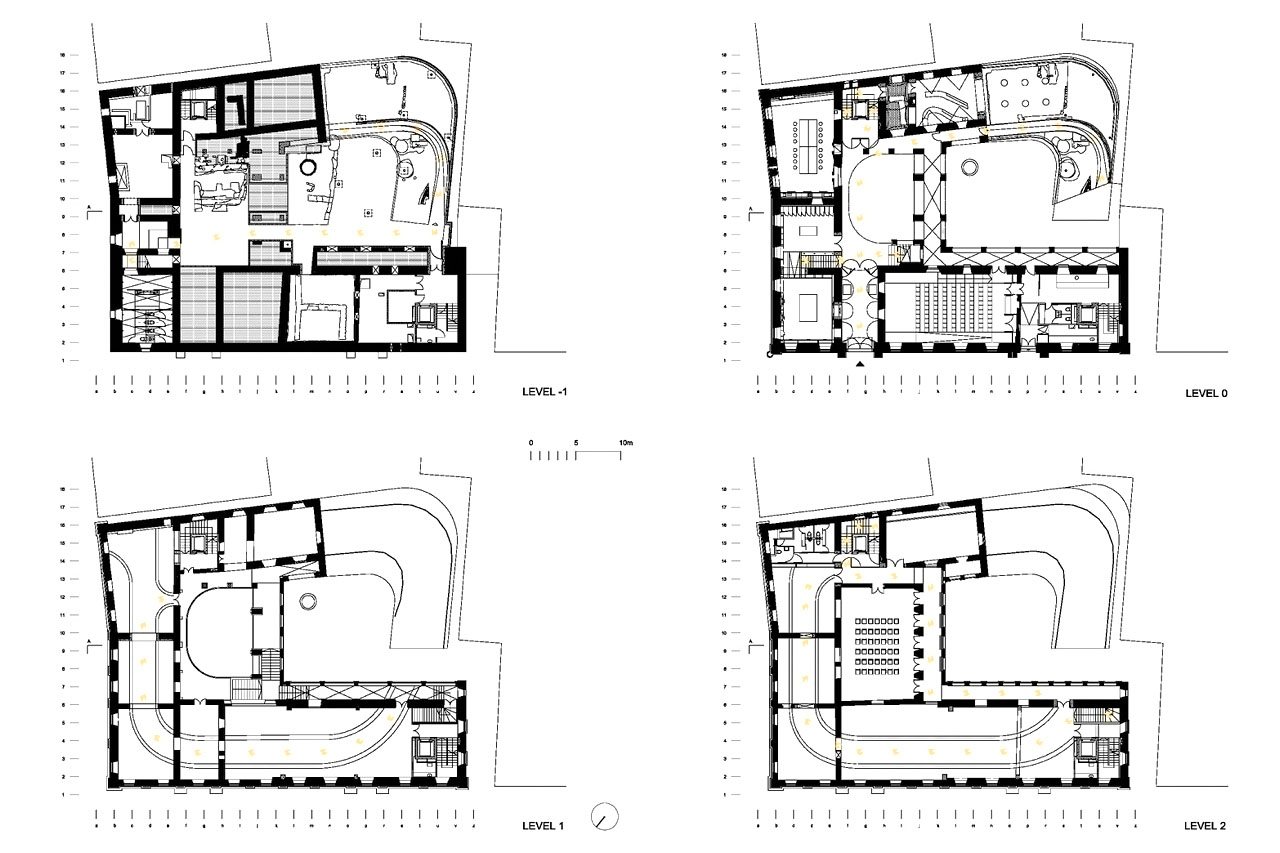 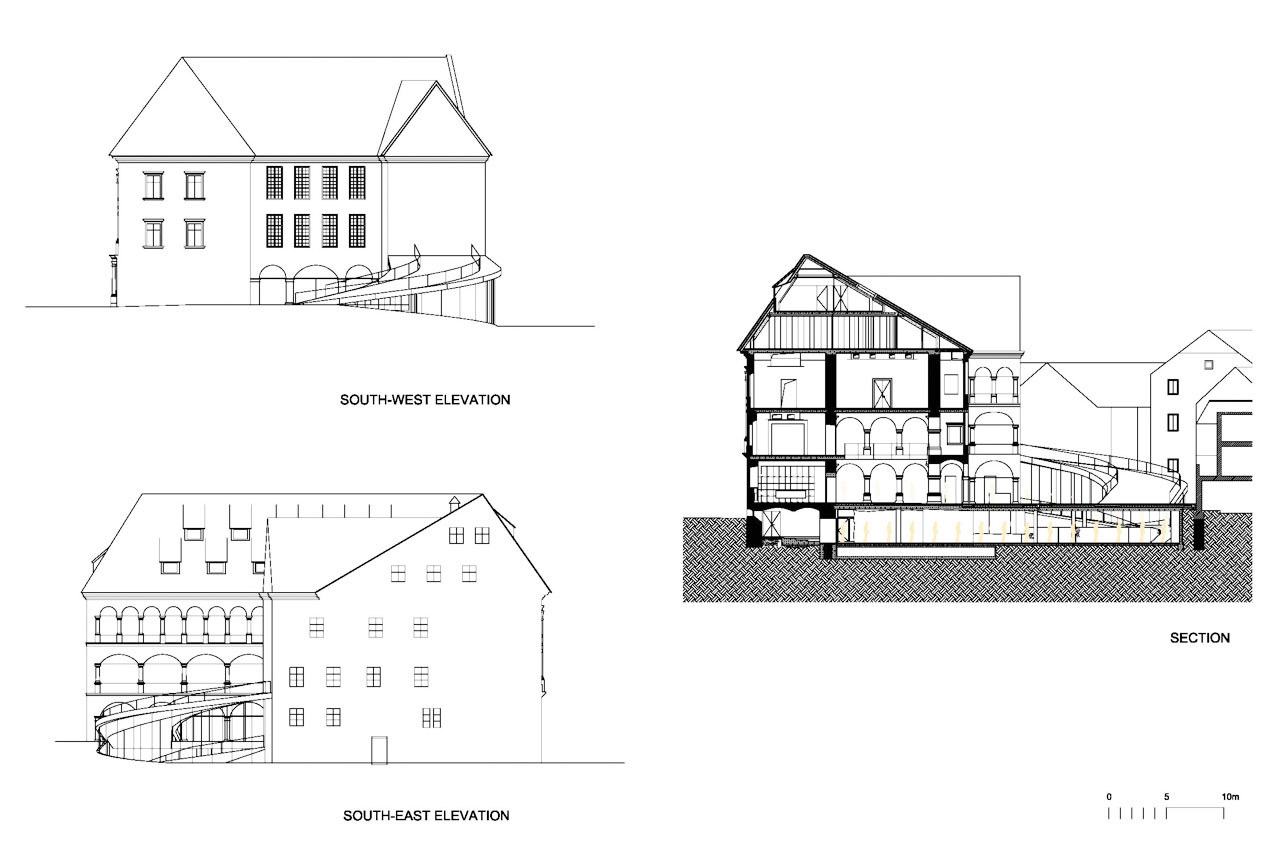